Latitude returns for its ninth edition this summer and have announced that Two Door Cinema Club will make their first festival headline performance on the Obelisk Arena. Announcing the trio ahead of the biggest show of their career at London’s O2 Arena to 16,500 fans, Latitude has confirmed the Irish indie rockers will make the step up to headline Latitude’s main stage. With infectious guitar riffs, glistening electronica melodies and Alex Trimble’s lifting vocals, the band will be slowing down after a year of intense touring to play their one and only UK show of 2014 at Latitude.

Not only will this be their first appearance at Latitude, but also the band’s very first festival headline show and we are delighted that Latitude is once again the place for a UK act to take that step. We welcome them with open arms and feet ready for a night of infectious anthems!

Kevin Baird from Two Door Cinema Club comments on their headline appearance: “It’s really exciting for us to be headlining Latitude in 2014. Over the past 5 years we’ve made the progression from playing in the small tents to being close to the top of the bill on the main stage. Headlining a great festival like Latitude is obviously quite a big deal for us but we also feel like it is the next natural step. We’re ready to headline. We’re ready to smash it.”

Californian sister trio Haim took the UK by storm in 2013, following an outstanding appearance on ‘The Jools Holland Show’ and subsequent release of their breakthrough album ‘Days Are Gone’, with ‘The Wire’ becoming the anthem of the summer for many. 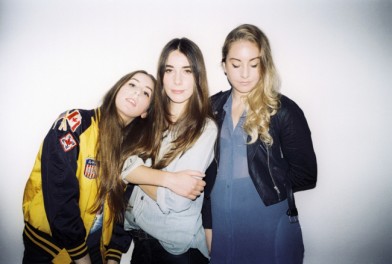 Nominated for an NME Award for ‘Best Track’ with ‘Don’t Save Me’ and topping the prestigious BBC ‘Sound Of 2013’ list, these talented siblings deliver an energetic live performance fusing retro, silky pop vocals and catchy rhythms. The crowds will no doubt go crazy for Haim during their debut Latitude performance.

For full details head to www.latitudefestival.co.uk

taking place from Thursday 17th to Sunday 20th July 2014 in the stunning grounds of Henham Park, Suffolk. Latitude, the UK’s favourite multi-arts festival, is proud to reveal the first line-up announcements at the earliest occasion in the festival’s history, on a date that will never occur again in our generation – 11.12.13.