One Direction open up about coping with fame 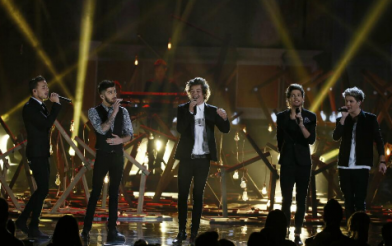 In just three years, One Direction have become the biggest boyband in history. The boys tell Event magazine just how they are coping with being household names in such a short time.

Zayn Malik admits to the magazine that he struggled at first. He said: “We’ve all changed. I definitely found it pretty hard to begin with. None of us really knew each other that well and none of us was really prepared.

“We were thrown in it together. We went through the same things. Our mums crying when we left home because they weren’t prepared either.

“I found it pretty hard at first. I was always trying to be too cool, like you do in school.

“I found it really hard talking to people, answering questions – you don’t want to sound like an idiot, so a lot of the time you don’t say anything at all.

“Then you realise everyone is in the same boat. None of us knew what we were doing. You can’t take yourself too seriously, and you all start to relax into being who you are. I can’t imagine how hard it would be to do this on your own – if you weren’t in a band.”

Liam Payne admits Harry Styles has it the hardest, he said, “I would absolutely hate to be Harry. Because I don’t think I’d cope with that extra level of attention.”

Niall Horan agrees adding, “He definitely found the whole experience all very easy.”
However, Styles remains calm and collected even with the added attention, insisting he just feels grateful to be in the superstar position he and his four other bandmates are in.

He says, “It wasn’t that long ago I was working in a baker’s, and now I’m doing this. I’m very lucky, and as far as I can see it’s all good.

“I don’t overthink anything. Everybody else analyzes you from your hair to your eyebrows to the way you wave your hand. If you start worrying about it and overthinking everything you do, it all just becomes false, so I think, just carry on as you are, do what you do and get on with it.”