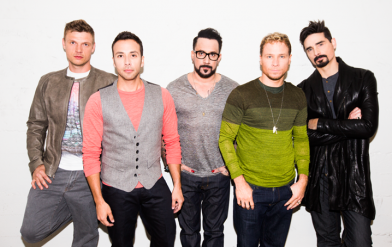 For the first time in 10 years all five of Backstreet Boys are back together and you can see them on their ‘In A World Like This’ tour when they tour the UK and Ireland. Support comes from one of the biggest and best loved UK girl bands of all time, All Saints, who are reforming especially for this tour.

The boys will kick off the tour on March 26 at Birmingham’s LG Arena and will also be performing dates in Dublin, Glasgow and London with a final show in Manchester April 5.

Last in the UK for the triumphant ‘NKOTBSB’ 2011 tour, the band now return with Kevin Richardson – marking these dates as the first they have done with all original members in nearly 10 years.

The band said: “Last time we were in the UK we were living in a house together recording our album, which was incredible. Our last UK shows were with NKOTB and we had a fantastic time – the reaction was out of this world. We can’t wait to come back and blow you away with our own full headline show. We’re really excited for our UK fans to see us again as a five-piece. The original Backstreet’s back!”

Joining Backstreet Boys are one of the 90’s biggest girl bands – All Saints. Melanie, Shaznay, Natalie and Nicole are no slouches themselves gaining five number ones, two multi-platinum albums, two gold albums and worldwide record sales exceeding 10 million throughout their career.

They said: “We are really looking forward to performing together as special guests of the Backstreet Boys. They are a great band, so it’s an honour. We’re singing a lot of big songs like Never Ever and Pure Shores which will be amazing. We can’t wait!!”.

Nick Carter, Howie Dorough, Brian Littrell, AJ McLean and Kevin Richardson, together as the Backstreet Boys, are this year celebrating their 20th anniversary. Formed in Orlando, Florida in 1993, they are the most successful boy band in music history. The group have sold over 130 million records worldwide, with globally successful and recognised hits including ‘I Want It That Way’, ‘Everybody (Backstreets Back)’ and ‘As Long As You Love Me’, In recognition of their successes; they received a star on the Hollywood Walk of Fame on April 22, 2013.

Tickets go on sale at 9am on Friday 22 November and can be booked from AXS.com.