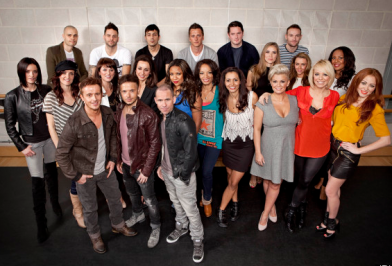 The Big Reunion was one of the must see TV shows of the year; 90s and early 00s bands Atomic Kitten, Blue, Five, Liberty X, 911, Honeyz and B*Witched all reunited to make what was epic and truly compulsive television viewing.

Their arena tours sold out, and the acts that defined pop culture over a decade ago, truly marked their return to the entertainment scene.

Now in aid of ITV’s Text Santa appeal, the cast of The Big Reunion season 1 have reunited to record a truly epic version of Wizzard’s Christmas classic, “I Wish It Could Be Christmas Everyday”.

The single will be released on December 15th via Universal Music with all profits going to ITV’s Text Santa charity appeal.

Text Santa, now in its third year, raises money and awareness for six UK based charities in the run-up to the big night, Friday 20 December. This year’s chosen charities are Age UK, Barnardo’s, BeatBullying, British Heart Foundation, CLIC Sargent and Help the Hospices.

The recording of the charity single produced by Cutfather (whose credits include The Saturdays and One Direction) will be the subject of a behind the scenes documentary that will air on ITV and ITV2.

Liz McClarnon from Atomic Kitten said, “”When we started the talks for The Big Reunion this time last year, we couldn’t have imagined we’d end up recording a Text Santa Christmas single! It’s all for charity and we are so humbled to be a part of it!”

Michelle Heaton from Liberty X said, “’I’m so excited about being involved with the Text Santa Christmas single … After 11 years who’d have thought we’d be performing with such amazing acts whilst raising money for six fabulous charities”.

Jimmy from 911 said, “Christmas is our favourite time of year. To be involved in text Santa is an amazing opportunity for which we are very lucky. But most of all raising lots of money for a great cause”

Ritchie from Five said, ‘To be given the chance to help raise money for the amazing charities that ITV’s Text Santa appeal help, to bring attention to their causes and the plight of the real people they help, aiding them to make lives better really is the icing on the cake for me after this “Big Reunion” year. And to do it at Christmas time is even sweeter. Do they know it’s Christmas? Hopefully they will with Text Santa!!”

Keavy from B*Witched said, “Back in the day we were in competition with each other this time round we get to do one big fantastic single together”

Celena from The Honeyz said, “We’re so excited we just can’t hide it!”

Five, Atomic Kitten, Liberty X, B*Witched, 911 and The Honeyz will be appearing in The Big Reunion Christmas Party Tour which kick starts in Nottingham Arena on 11th December. Tickets are available via itv.com/bigreunion with the Manchester and London shows both having an additional matinee performance.