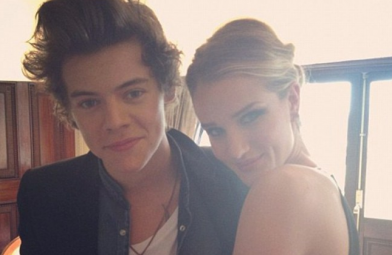 Harry Styles has revealed his ideal woman is Rosie Huntington-Whiteley, the model who is currently in a relationship with Jason Statham – adding: ‘It’s her face’.

In an interview in Australia, Harry was asked by a reporter “who is the most beautiful woman in the world? Other than your mother, sister or girlfriend?”

Harry  went on to describe the model as, “lovely, really cool.”

He wasn’t the only member of 1D smitten over the blonde beauty. Liam went on to say:

“I’m not the best at talking to women. When you’re with someone like Rosie, it’s a bit more difficult. I was like, I don’t really know what to say, so I’m just gonna kind of stand here and try to be cool.”