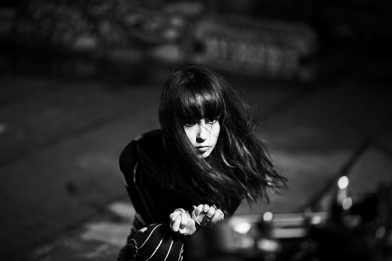 Hot on the heels of supporting Jake Bugg and Miles Kane and a full-on festival assault which included Reading & Leeds, Secret Garden Party and Ibiza Rocks, the one woman powerhouse that is Findlay delivers more passionate, filthy musings on forthcoming ‘Greasy Love’ EP, due to be released on Polydor on 25th November.

With producer Flood (Depeche Mode, Foals, PJ Harvey) at the controls, ‘Greasy Love’ steps up the visceral power of previous tracks ‘Off & On’ and ‘Your Sister’ with primitive drums driving into a raw, blistering chorus. With an intoxicating rhythm heavy on snarling, woozy vocals, the track throws down more of Findlay’s ferocious swagger.

The dark, moody video which premiered on VEVO yesterday follows a vampish Findlay as she prowls around the gritty streets of London roaring at the night sky with lashings of psychedelic, trippy scribblings courtesy of Ruff Mercy (Danny Brown, Flying Lotus) to bring the scene to life.

Findlay underlined her position as one to watch this summer by strutting in front of Mick Jagger after being personally selected to play at L’Wren Scott’s infamous Serpentine Ball, earning a spot on London Evening Standard’s Power 1000 List – this Manchester girl is going places.