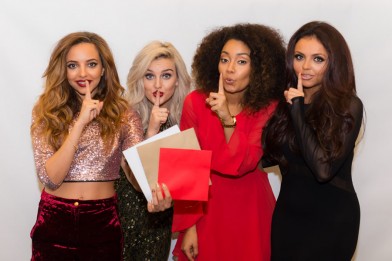 If the thought of working with Little Mix gives you wings, or you’re simply crazy for arts and crafts, it’s time to get your pens and pencils ready!

A nationwide competition is launching yesterday (7th October), giving youngsters a unique opportunity to create a Christmas card design for a brand new charity card pack starring chart-topping girl group, Little Mix….but entrants have got to be quick, the contest will close on 14th October 2013!

The ‘Sketch Santa’ competition, launched by ITV’s Daybreak and supported by Hallmark, offers children aged 6-16 a once-in-a-lifetime chance to have their drawings brought to life as a card this Christmas. The winning design will be modelled by Little Mix and featured in a limited edition six pack of cards alongside five festive designs starring the group. What’s more, the lucky winner will be announced on national TV too!

Sold as an official product for ITV’s ‘Text Santa’ appeal 2013, the special card packs will be available nationwide from www.hallmark.co.uk and selected Hallmark stores later this year. Each pack sold will see a portion of the proceeds donated to the ‘Text Santa’ appeal; which in turn supports six worthy charities based in the UK.

Little Mix’s Perrie Edwards, said: “We love the idea of getting creative for Christmas and what better reason to get involved in a bit of festive fun than to help the Text Santa appeal? We had such a good time creating our cards for this special pack and now we’re really looking forward to seeing what the Daybreak viewers come up with as their contribution!”

To enter the art contest, children are asked to create a Santa-based design inspired by what Christmas means to them. Entries must be original, creative and drawn on A4 paper in a portrait setting.

“Whether you’re a devoted ‘Mixer’, a fundraiser or you simply love to get creative, the Sketch Santa competition really is a fantastic opportunity. Not only could you be changing the lives of those linked to the Text Santa charities but you could also enjoy some life-changing experiences yourself, such as starring on national TV and seeing your very own Christmas design hit the shelves.

“When it comes to penning that winning design, I’d concentrate on two things. Firstly, make sure you base your design on what Christmas means to you as that personal touch will show through in your artwork. Secondly, remember the critical role that Christmas cards play in our festive traditions, they’re kept in the hearts of our homes and are used to decorate mantelpieces, windowsills and walls. As such, your design will need to stand out in this setting.

“We wish everyone involved the best of luck and we can’t wait to see all the wonderful designs that come through. This is the third year we’ve been privileged to work with Daybreak on a creative campaign such as this and we’re sure it’s going to be our best one yet!”

The ‘Text Santa’ appeal aims to raise awareness and donations for UK charities that make a difference to people’s lives. For 2013, the six chosen charities set to benefit from funds raised include: Age UK, Barnardo’s, Beat Bullying, British Heart Foundation, CLIC Sargent and Help the Hospices.

Full details of the competition, entry forms and guidelines will be held on www.itv.com/daybreak. Further information, and behind the scenes news, will also be shared on www.facebook.com/hallmarkuk .