Having won over the hearts of the nation on The Voice UK 2013, Belfast-bred winner Andrea Begley unveiled the artwork for her debut album, ‘The Message’ due for release on 21st October through Universal Music.

Since winning The Voice UK back in June, Andrea has been busy working on the album. Even her coach, Danny O’Donoghue joined her in the studio to give his support and his seal of approval by producing the album’s lead track ‘The Message’. 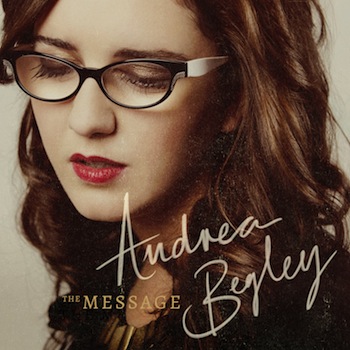 Andrea says, “Danny has been a fantastic source of support to me both throughout the show and beyond it. He has always believed in me and in my songs and it was a total honour and privilege for him to produce one of my own songs for the album. I couldn’t stop smiling while I stood in the studio with him working on the track. I count myself a very lucky person.”

Including original tracks written by Andrea alongside her twist on a selection of some of her favourite songs (‘Lightning Bolt’, Jake Bugg and ‘Dancing In The Dark’, Bruce Springsteen), ‘The Message’ is an encapsulation of Andrea’s enchanting voice and talent which won over the public’s affections earlier this year.

Andrea says, “This album for me is the best showcase of myself as an artist, I think it captures my personality within it. The album is extremely close to my heart and offers the listener a first taste of the direction I intend to go as an artist beyond this point.”

Beating finalists Leah McFall, Mike Ward and Matt Henry to be crowned the winner of The Voice UK 2013, Andrea has had an incredible few months. She says, “Since winning The Voice UK I’ve been adapting to life as a recording artist which was I must admit, a little bit of a shock to the system at first. I’ve been concentrating heavily on the album, choosing the right songs and getting the arrangements right as well as working on my new book about my experiences on the Voice UK. The diversity of my work is so exciting and I can’t wait for more.”

Andrea has also set live a new acoustic performance video for one of the tracks from the album,’Secret Smile’:

Her first headline shows following the release of her debut album – performing at the Ulster Hall, Belfast on November 3rd and the Union Chapel, Islington November 4th.