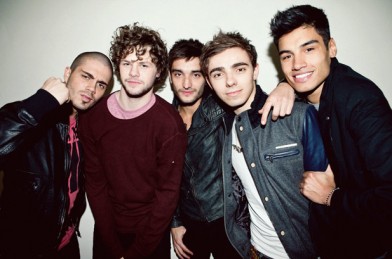 Pop Scoop! is giving you and a friend the chance to see The Wanted, The Saturdays, The Vamps, Conor Maynard and more take to the stage at the SD2 Festival in Brighton.

And the winner of two tickets to see The Wanted, The Vamps, Conor Maynard, The Saturdays & more at SD2 Festival in Brighton is….

Fresh, fierce and fabulous, 18 year old A*M*E is one of the hottest names in pop right now having delivered the vocals on Duke Dumont’s UK number 1 hit single Need U (100%). This fast rising r n’ b, pop star is releasing her own crossover summer hit Heartless and 2013 is set to be the year of A*M*E.

The Vamps acoustic driven guitar pop has marked them out as the newest boy band on the block and they have just supported McFly on a huge nationwide UK tour. The boys have picked up thousands of fans around the country and they are an exciting addition to the SD2 line up.

Hobbie Stuart is another Brighton boy renowned for his covers of pop acts such as Katy Perry, Jessie J, Adele and Rihanna which generate hundreds of thousands of views on his YouTube channel. Hobbie is now uploading original material and has signed to Sony Music so expect to hear a lot of noise about this talented local in 2013.

SD2 has also confirmed it has partnered with children’s charity Rockinghorse to auction a VIP package for 4 which includes a meet and greet with The Wanted, The Saturday’s and Conor Maynard. The VIP meet and greet auction will take place on eBay and Ryan Heal, CEO of Rockinghorse Children’s Charity, said: “We are delighted to announce our partnership with SD2 Festival as their official charity partner and we’re extremely excited to be able to offer our supporters the opportunity to bid for a VIP meet and greet with each of the headline acts in our very special charity auction.”

SD2 promoter Steve Jones comments, “We’re so pleased we can offer our support to our official charity partner Rockinghorse Charity, who continue to do remarkable work helping improve the lives of sick children in Sussex.”

To be in with a chance of winning tickets for you and two friends to see this blockbuster show, all you need to do is:

• Right of admission is reserved by the Promoter and the Event Venue. Winners are advised to adhere to Ticket terms and conditions.

• There is one prize (the “Prize”) on offer consisting of three tickets to the SD2 Festival 2013 Brighton on 29th September 2013. The Prize does not include any travel or expenses incurred

• The Closing Date of this competition is: Midnight, Tuesday 17th September 2013

• Entrants must be at least 16 years of age at the time of entry for the Competition.