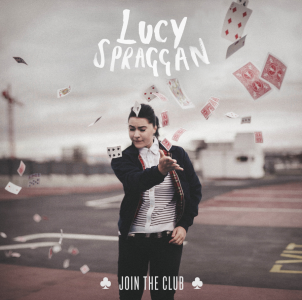 Singer songwriter Lucy Spraggan has today announced her album ‘Join The Club’ will be released through Columbia Records on October 7th. New single Last Night (Beer Fear) is set for release on September 30th. She also unveiled the artwork for the album.

Lucy was the first contestant on the X Factor to perform her own compositions. Previously ‘Last Night’ otherwise known as ‘Beer Fear’, climbed to number 11 on the Official Chart with less than a week’s worth of sales. Following the show she was the most Googled UK artist of 2012 and now has over 24 million views on YouTube.

Lucy has unveiled the video for new song ‘Mountains’ which is available to download now when pre-ordering the album. The inspirational track was initially scribbled on the back of a banknote after a chance meeting with a stranger.

Speaking about the album Lucy said:

“I wanted to put my own take on events that happen to everyone by telling these stories. I’ve been writing this album for as long as I can remember and I hope people will be able to relate.”

Lucy also spoke out about the new artwork revealed today on her Facebook page to let fans know her decision behind the picture:

“To anyone who doesn’t like it too much; this photo is honest and unconventional – a little like my music and personality. I had hundreds of nice, eyes open, perfectly shadowed, pretty photos to choose from but I chose this. It’s real. It’s honest. How many times have you seen an honest facial expression on an album cover?

It’s about me being a human being, just like everyone else. Xx”

‘Join The Club’ features tear-jerker ‘Tea and Toast’ which previously made X Factor audiences weep (almost 5 million views on YouTube) as well as her debut single ‘Lighthouse’. The album was largely written while Lucy couch surfed across the US and ‘In A State’ is a country inflected dedication to falling in love whilst on her travels. Showcasing Lucy’s hip-pop style ‘You’re Too Young’ tells the elegiac story of a lost girl while ‘Wait For Me’ has already become a festival anthem.

This year she sold out her first headline UK tour including two nights at the Borderline as well as packing out tents at V Festival, T in the Park and Belladrum. This Autumn Lucy will embark on a nationwide tour including Leeds, Sheffield, Birmingham and Manchester and her biggest show to date at London’s Shepherds Bush Empire on October 30th.