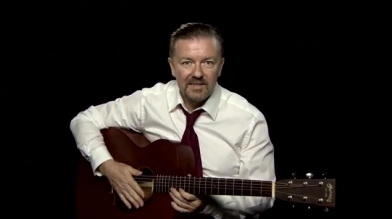 Brent has a catalogue of song already, with titles like ‘Life on the Road’, ‘Ooh La La’, ‘Spaceman Came Down’, ‘Free Love Freeway’, ‘Ain’t No Trouble’ and his latest tutorial out today via Ricky’s YouTube channel, ‘Slough’.

Ricky says; “I can’t believe I’m now getting ridiculous offers from major record deals all over the world for a David Brent album. Where were these people when I was trying to be a real popster? And starving? haha”

The Learn Guitar with David Brent series, which is housed on Gervais YouTube Channel (www.youtube/rickygervais.com), has received a string of YouTube cover versions and fan sites.

In his latest instalment ‘Slough’, out today, Brent also toys with the idea of reforming a band. He calls on his pupils to get in touch if they want to fill the “big shoes” of his former band mates Reggie Mental, Flange Warrior and Mammogram from Brent’s band Foregone Conclusion.

Ricky says; “It’s been so much fun bringing back David Brent and have him philosophise on Youtube, and spend all his hard earned repping money on still trying to become a pop star. It’s funny and sadly true of today’s x factor culture.”

Listen to David Brent’s ‘Slough’ below: