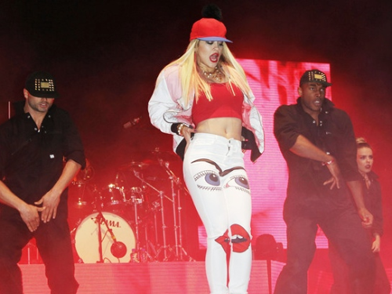 In the first LGBT musical festival of its kind to be held in London, Union J and Rita Ora took to the stage in front of a wonderfully charged crowd, consisting primarily of people in various states of undress under the scorching May sun.  While Rita Ora delivered all that was promised in a staggeringly confusing pair of jeans, Union J struggled against a largely indifferent crowd.

As One In The Park is the child of Orange Nation, a UK-based gay night club promotions company, who have been so successful across Europe in the past few years that they finally managed to throw an enthusiastically gay summer festival. Showing that English weather can be occasionally merciful after all, the entire length of the festival was drenched in sun, which was a good enough excuse for the majority of festival-goers to strip down as much as their shame allowed. Aside from the main stage (which included Katy B, Connor Maynard and Rylan Clark), the cheerful punters enjoyed fantastic funfair rides, impromptu burlesque shows and a never-ending supply of good food and alcohol. In short: As One In The Park was the start of what we hope is a yearly London legacy.

Union J, formed during the ninth series of The X Factor, have their first single Carry You out on 2nd June, and have been doing the festivals circuit to promote it. Their set, which included Carry You, was fairly short – 12 minutes, in fact – and was a little unpolished. Perhaps their inexperience rendered them a little shy, but they did not make as large an impact on the audience as one would have hoped. On the plus side, the boys performed admirably, if a little phlegmatically, and seemed genuinely happy to be there. Their cover of Carley Rae Jepsen’s Call Me Maybe was genuinely great.

Rita Ora was very much on form when her headlining performance finally began at the end of an amazing day. Despite the fact that she had to compete with brilliant sets from Grace Savage (the UK Female Beatbox Champion 2012) and Katy B (who had the entire festival crowd roaring in ecstasy to Katy On A Mission), Rita Ora stole the show. Pumping much more energy into her act than most other acts had throughout the day, Rita Ora was accompanied by 4 frenetic back-up dancers and had total control over the crowd during her hits Hot Right Now and How We Do (Party). Especially impressive was the sound system, which during Rita Ora’s livelier numbers had the bass rippling a small earthquake through East London. Needless to say, Rita Ora received the biggest reception of the day, and by the end of her fantastic set we even warmed to her bizarre wardrobe choices.

As One In The Park was a real treat, but aside from a handful of decent main stage acts, most of the enjoyment came from the atmosphere, the people, and the ambiance of free love and liberalism that permeated the warm summer air. Perhaps next year the music will be the highlight of the day – we’ll certainly be looking forward to it.