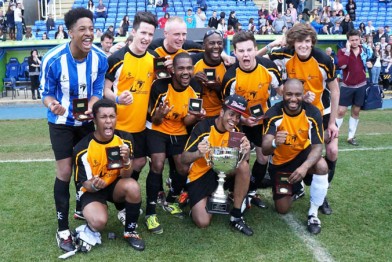 On this sunny Sunday afternoon (26th May), the Pop Scoop! team took the opportunity to support an amazing charity and as a bonus, the trip to the Madjeski Stadium gave us the opportunity to mingle with celebs taking part in the Reading leg of the Soccer Six charitable football tournament.

As soon as we arrived, stars from the world of TV, music, sport, film and entertainment were already arriving, and taking time, on the parking lot, to take some pictures with fans. While inside, some of the more serious contenders were already warming up.

Seating (but mostly standing) on what turned out to be a gloriously sunny day, as well as getting sunburned, we met a few enthusiastic celebs excited to play like Sam Callahan and Alfie Deyes in the same team, Ollie Marland and Futureproof, Rough Copy and Jack Maynard and Luke Towler.

Dappy by far had the loudest fans, we decided to edge our bets on Concept’s team… so we pretty much focused our attention on them during the tournament. Their team was aptly named Team Chip (erm, because Chip was in their team!).

It turned out we made the right decision; they made it to the semi-finals against Kye Sones, Frankie Cocozza, Adam Burridge, well The X Factor team, and won when Karim from Concept managed to stop the ball in the penalty shoot-out. We then followed them to the final against the EastEnders team, where they won the Soccer Six trophy.

(Ps: Kye Sones was chilling after semi finals against the Concept team, and told us to expect some music from him to be released very soon.)

After an exciting day on the pitch, fans were invited to go inside the Stadium to get some exclusive performances of their favourite artists. New really promising artists like Kingsland, AloneStar, Luke Towler, The Parades, or Sam Callahan performed, as well as more established acts like Rough Copy, Concept, Future proof, or Times Red. Ronan Parke also appeared on stage to answer some fan questions, and we had the chance to listen to a snippet of his new single, it’s going to be a huge hit!

One of the highlights had to be Luke Towler. He definitely blew our minds, and it seems Dappy liked his performance too. When Luke performed Dappy’s I.O.U, the man himself joins Luke onstage for an improvised duet.

The performances and enthusiasm were amazing and from the crowd’s reaction, Luke Towler, Sam Callahan, Concept and Times Red are definitely ones to look out for in the coming year!.

This whole day in the sun on a football field, and ending the night with a great gig made this day pretty special. We can’t wait for a Soccer Six 2014 announcement!