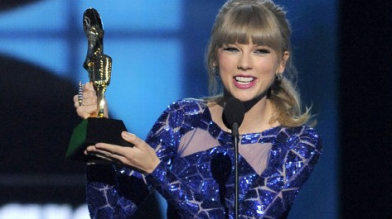 The American beauty – who is just has famous for a sequence of relationships with celebrities including Harry Styles – thanked her fans as she picked up the evening’s top honour, the coveted Artist of the Year prize.

She said: “Thank you for making my music the soundtrack to your crazy emotions. You are the longest and best relationship I’ve had.”

As well as Artist of the Year, Taylor also took home honours including Top Country Album and Billboard 200 Album for ‘Red’, Top Country Song for ‘We Are Never Getting Back Together, Top Female Artist and Top Country Artist.

Watch the speech below: