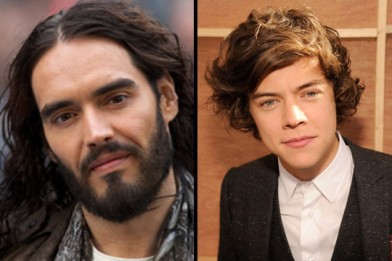 Russell Brand has warned Harry Styles they could be heading for a “inter-generational sex war” if the One Direction heartthrob continued focusing on older women.

The comedian opened up in an online Q&A with fans on Heatworld.com to promote his upcoming Give It Up for Comic Relief benefit at London’s Wembley Arena on March 6.

He said: “I think One Direction seem really, really lovely. I met them at the Olympics and they were really good looking and charming.”

“I really liked Harry. I like the curly hair and he’s got nice lips, he seems quite cheeky, they’re all very funny. I think they’re lovely and we’re not competing for the same female audience, they’re quite young.”

After being told Harry likes older women, Brand replied: “That’s not on, There’s got to be carefully defined parameters otherwise there’ll be an inter-generational sex war, and you know where that leads in the world of pop.”