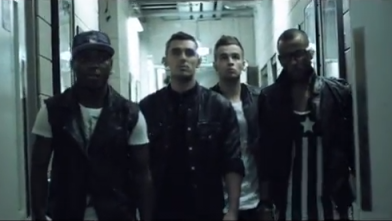 Former X Factor favourites The Risk recently released their debut single ‘Missiles’, to be followed by a debut album next summer. They have managed to do this off the back of a steady fanbase. The boys took time out of their busy schedules to answer some of questions their fans have been asking us.

What has life been like since being part of X factor series 8?
Hectic, we’ve been gigging like mad – over three hundred to date as well as the x factor tour and supporting Peter Andre. Also we have been in the studio preparing songs for an album and getting closer as a band

What are you guys like as friends now, put together as a group by Tulisa. Is there ever any friction within the group or disagreements?
Its quite mad to think we didn’t know each other and now we live in each others pockets. We really are each others best friend & we have the show and Tulisa to thank for it.

Any arguments we have are usually to do with what pizza toppings we order.

We’re there any other names for the band apart from The Risk? If so what were they?
I think just Unison … and Boyz 4 Men.

What are the perks of being in The Risk?
Sharing a dream with three best friends, and getting lots of freebies.

Who is the funniest in the group?
We all have our moments!

Who is the most vain in the group?
Probably Ash or Andy.

Who has the worst temper?
Andy.

Your following is growing by the day. Are you enjoying the attention from groupies?
Its always flattering to see the response we get and to know its growing makes us really happy. As an artist you can only hope to be liked and to inspire.

Your working with some pretty respectable names in the industry including Dantae and Pete Martin. How did these collaborations come about?
Our management have been really good at hooking us up with producers and we have been lucky to work with the people we have. Some collabs came about purely by bumping into the right people at the right time.

Your debut single is ‘Missiles’, How do you feel about the end result?
Considering it was all funded and publicised by ourselves without a label or investor, we are really happy with the fact we were able to peak at 32 and maintain our place in the top 40 and to be played on Radio 1.

What made this track feel like it was right to be your first single?
We needed something that would set us apart from the other boybands so we wanted to go down an urban route. We have the dubstep element and Derry rapping on the track which we feel does this.

How important is being involved in the writing process to The Risk?
We always like to put our own stamp on a song because we feel its important for us to connect with every song we record so it feels original.

What was it like making the video for ‘Missiles?
Very cold! But so surreal, it felt so special because it was the first one we have done as a band. We just had fun and tried to enjoy it all!

What could we expect from your other tunes and when should we be expecting the first album?
Album should hopefully be dropping around the summer time! As a sound we have a definite RNB edge with a bit of pop, soul and dub undertones. We will most certainly have a couple of ballads on there to really highlight our harmonies.

Are there any plans for a UK tour?
Hopefully! It all will depend on how well the singles and album does ;)

If you can tour with anyone alive or dead who would it be? 2) Who are your musical inspirations?
Absolutely Michael Jackson! Inspired by MJ, Boyz II Men, Usher, Stevie Wonder, Mariah Carey, Whitney Houston, Chris Brown.

If an alien came down to earth and you could recommend them one album to listen to what one would it be and why?
Michael Jackson – BAD > it has so much variation, and his vocal ability is crazy!

What/where would your dream date be?
In Hawaii on a beach, having a Luau.

If you could take three attributes from three women to make your perfect women, what would they be and which three women?
JLO’s bum, Beyonce’s talent & Ciara combined!!