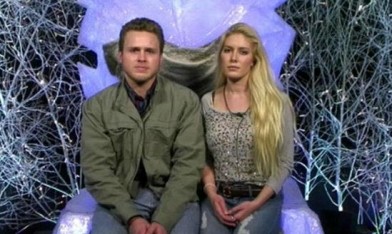 Celebrity Big Brother runners up Spencer Pratt and Heidi Montag have issued an open letter to Ofcom, telling it to “stop whining” after the broadcasting watchdog responded to complaints from viewers that they were cruel bullies who tormented the other housemates.

Following the news that at least 35 viewers are thought to have complained. The couple wrote: “We would caution the Ofcom people not to watch any episodes of Lost. There’s a guy on there named Ben who does some pretty terrible things to people.

“Also, definitely steer clear of any of the original Star Wars movies. There’s a guy in a big black suit named Darth Vader who kills people just by using his mind!

“Oh, and definitely don’t go near any Looney Tunes cartoons! There’s this coyote who tries to EAT the main character! Only he gets anvils dropped on his head so there’s twice the evil! The horror!!!

“While they’re at it, they should probably stay away from taxis in case they get an angry driver or the coffee shop to avoid a waitress having a bad day.

“No family reunions either because let’s be honest, everyone has that one uncle who’s a jerk to people, right? The world is a complex place. There are villains out there. Some of them are actual villains. Some just play villains on TV.”

And they more or less admitted that they’d been putting on their arrogant behaviour for the cameras.

“What would Star Wars be if there were no Empire to defeat? Villains are essential to our culture, both our art and our real lives. We don’t condone violence and we don’t condone bullying. We do, however, get paid to be on television.

“Television that would be much less watchable if there were no conflict. So please, in the nicest, most properly British way possible, put on your big girl knickers and stop whining.”

“In America, ‘bully’ is a very serious word that shouldn’t be thrown around,” they said.

“All those housemates were beyond out of line. They all lost the plot and forgot CBB is a game. There was no real bullying in that house.”

Speidi finished second in the show, behind winner Rylan Clark.