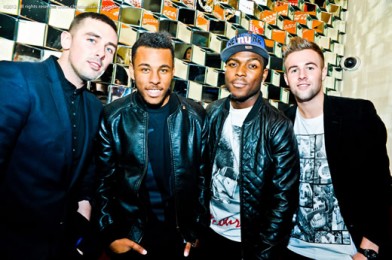 Former X Factor band The Risk have unveiled the music video for their debut single ‘Missiles’, due for release on 27th January followed by a debut album next summer.

Their debut single ‘Missiles’ is co-written by The Risk with Dantae and produced by Pete ‘Boxsta’ Martin, who has worked with the likes of Jessie J and Alexandra Burke.

Missiles begins on a ballad vibe with the crisp vocals of Andy Merry joined by Ashford Campbell’s soulfull harmonies. Charlie Healy comes in on the beat and the mood changes to a more up tempo pop/dance track.

Derry Mensah adds a dash of rap that really brings the track to life. The boys tight vocal harmonies shine and their vocal abilities have been honed in this track.

Charlie, Andy and Derry entered 2011’s X Factor as solo artists before joining together to form The Risk at the Bootcamp stage. Mentored by Tulisa, their fourth member Ashford (originally in rival boyband Nu Vibe) joined them during the live shows after the sudden departure of Ashley Baptiste.

Regularly praised for their tight vocal harmonies, The Risk’s many stunning performances for the show included interpretations of Plan B’s ‘She Said’, the Gnarls Barkley smash hit ‘Crazy’, and ‘Just The Way You Are’ by Bruno Mars.

Within two days of leaving the competition, the boys had booked over 100 shows including the
X-Factor arena tour, and hold the record for the most booked former contestants.

The Risk have been working with Josh Wilkinson (One Direction), True Tiger (Ed Sheeran), and Kingsley Brown (Cheryl Cole) on their debut album.

The band are currently touring with Peter Andre until the mid-January, but are also planning a special headline show of their own this month – details to be announced soon.

‘Missiles’ will be released on January 27. Watch below: