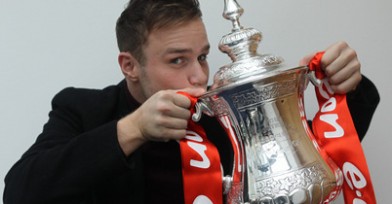 Olly Murs has been named as an official ambassador for The Football Association.

To mark the English football’s governing body’s 150th anniversary, the Xtra Factor host will be involved with National Football Day in August, as well as other activities as part of the FA’s year-long celebrations.

Talking about his love of sport and why he got involved he said:

“I’m delighted to be an official ambassador for The Football Association for its 150th anniversary year.”

“I’m a huge football fan and will be involved in FA events and initiatives over the course of this year.

“In particular, I want to help to showcase the amazing work The FA does at the grassroots level of the game.”

Yesterday he announced that his next single, Army Of Two, will be released on March 10.