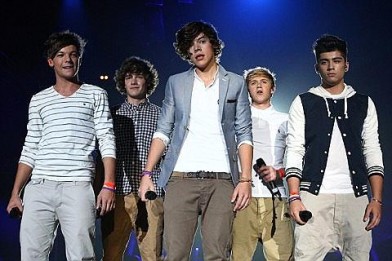 Robbie Williams seems to like talking about One Direction and this time he believes the boys can be as big as the Spice Girls.

The Take That singer claimed that One Direction have a “similar chemistry” to the biggest girlband in history.

Williams told The Sun: “They’re quite a power in the way the Spice Girls were. The Spice Girls took over the world and won and I think the One Direction boys have a similar chemistry.”

Speaking of the Harry Styles and what fame and good looks has brought to the 18-year-old heartthrob, Williams said: “He’s a magnet like I’ve never seen before. I don’t think Harry needs any tips from me.

“He’s beguiling, and so are One Direction. I wasn’t him when I was 18. That didn’t happen to me.”

A couple of months ago Robbie revealed he felt sympathy for Harry and sees similarities between the youngster and himself in the early days of Take That.

“I feel a bit for Harry,” Robbie told The Sun “At his age I was in this lilywhite boyband, Take That. But I was meeting up with mates, jumping out of the tour bus and into a Transit van at motorway service stations all around the country.

“It’s not a secret any more but I would get off my face and have complete anonymity. No one had a camera phone so I could go and enjoy myself properly. Harry is finding out it’s not so easy for him.”