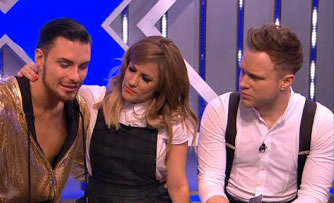 Olly Murs has confirmed that he won’t return to the Xtra Factor as co-host in 2013 and X Factor finalist Rylan Clark is hotly tipped present the show alongside Caroline Flack.

This is according to the Daily Star. A show insider told the paper, “Olly loves being on the show but there’s no way he can do it next year if he wants to crack America.

“He had to cut short supporting One Direction on tour this summer and he doesn’t want to do that again next year.

“He doesn’t have to decide yet but he’s made it clear he’s 90 per cent certain he won’t be back.

The source said, “Rylan was a big character this year and has already proved he’s a natural TV presenter while filling in for Richard Arnold on Daybreak.”