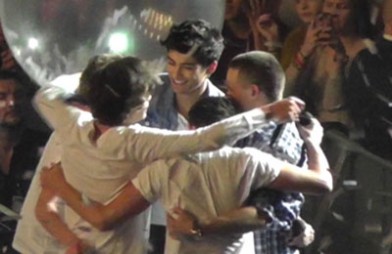 One Direction performed their biggest show to date at Madison Square Garden in New York on Monday (03.12.12) and admitted they couldn’t believe the scale of the occasion, hailing their gig as the “best night of their lives”.

Niall, 19, told the crowd: “This is the best night of our lives. You guys have travelled from all around the world and we cannot believe what has happened here tonight. Thank you so much.”

The quintet shot to fame after coming third on UK TV talent show ‘The X Factor’ in 2010 and admitted on stage they can’t believe how much their lives have changed since then.

Zayn, 19, said: “I’m overwhelmed. I’m from a small town in Bradford. Things like this don’t happen to people like me. I owe it all to you.”

The group were joined on stage by Ed Sheeran for their latest single ‘Littlest Things’, which the ‘A Team’ musician wrote, and wrapped their 18-song set – which included hits ‘Live While We’re Young’ and ‘One Thing’ and a cover of Wheatus’ ‘Teenage Dirtbag’ – with breakthrough track ‘What Makes You Beautiful’.

As they left the stage, 18-year-old Harry told the crowd: “I have never been so proud.”