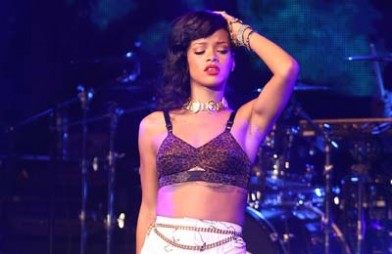 Rihanna and Mumford & Sons are to headline the T in the Park festival in Scotland next July.
The ‘We Found Love’ hitmaker will top the bill at the Scottish festival – which celebrates its 20th anniversary next year – over the weekend of July 12 to 14, with Mumford & Sons also taking one of the three headline slots at the annual event, which takes place in Balado, Kinross.

Festival director Geoff Ellis said: “Seems like only yesterday that the first band took to the stage at Strathclyde Park for our inaugural T in the Park in 94. Now here we are in 2012 announcing two of the world’s biggest and best acts to headline our 20th edition.

“We have always worked incredibly hard to bring our T in the Park fans the best line-up possible, and this year is no exception.

“We are unbelievably excited that Rihanna and Mumford & Sons will be taking to the Main Stage in Kinross – as we are sure our audience will be.

“We have many more fantastic acts in store for everyone and will announce these next year but it’s shaping up to be one hell of celebration.”

Also confirmed to appear across the weekend are Alt-J, Paloma Faith, Jake Bugg and Of Monsters and Men.