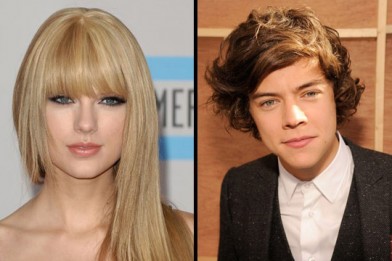 Harry Styles is apparently ‘livid’ that internet trolls have been targeting rumoured girlfriend Taylor Swift’. Directioners are pretty protective at the best of times, but some outraged fans have taken things a bit too far, leaving Harry pretty peed off.

“Harry is livid. He just wants to date who he wants without fans going into overdrive every time he’s linked to someone,” a ‘friend’ of Harry’s told Star.

“He knows he gets a lot of attention from girls, but he’s fed up. He just wants to have a normal love life and feels bad for Taylor.”

Some 1D trolls have been so over-the-top, one so-called fan tweeted: “You’re a f**king ugly b***h. I want to stab you to death and play around with your blood (sic).”

But, unfortunately for 1D fans, new reports are saying that Taylor is already getting broody.

“She’s obsessed with Harry, she’s already talking about marriage and babies.” an insider told the magazine.

“She’s planning a romantic Christmas vacation, just the two of them.“he’s gone off the rails.”