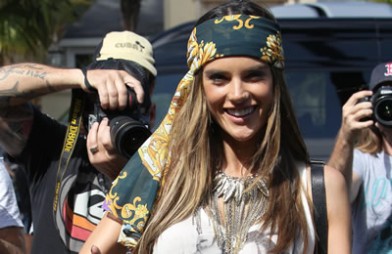 The Victoria’s Secret model would love to “raid the closet” of the British supermodel as she adores everything she wears.

She said: “I wish I could raid the closet of Kate Moss. She has such amazing style and clothes.”

While Alessandra loves Kate’s style, she would describe her own as “boho chic”.

She told Life & Style magazine: “Most days I’m boho chic but I love to be glamorous for a night out on the town.”

Alessandra also revealed she has her heart set on a Valentino clutch bag.

She said: “Right now I’m lusting after a studded Valentino red clutch. I borrowed one recently for an event and have been thinking about it ever since.”

While Alessandra favours a “boho chic” style, she recently showed off a more glamorous look when she donned the Fantasy Bra for the annual Victoria’s Secret fashion show.

And the Brazilian beauty was delighted to be chosen to wear the prestigious jewel-encrusted piece – which is redesigned every year – for the 2012 catwalk spectacular.

She said recently: “I just wanted to scream. But I won’t lie, I was really worried.”

This year, the Fantasy Bra took a floral theme and the $2.5 million design by Long Island’s London Jewellers featured a centrepiece of a 20 carat white diamond, and 5,200 other gems including amethysts, sapphires, rubies and diamonds set in 18-carat rose and yellow gold.

Alessandra said: “It was perfect – I felt they made it for me. It’s very romantic.

“I’m pretty calm. I’ve been waiting for this moment for a long time.”