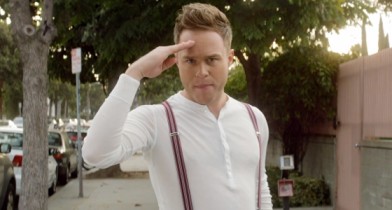 Xtra Factor host Olly Murs knocked One Direction off the top spot this week with his new single ‘Troublemaker’, meaning Girls Aloud miss scoring a number one with their comeback single ‘Something New’.

The Flo Rida-assisted single has racked up an impressive sale of 121,000 copies in its first week, finishing well ahead of Girls Aloud ‘Something New’ equaling their record of four Number 1 singles.

“Wow! My fourth number one single, I am so happy I can’t even begin to tell you! Thanks so much to everyone who bought Troublemaker, I hope you all like the album too!”

Girls Aloud secure their 16th Top 5 hit with comeback charity single ‘Something New’, raising money for Children In Need, while One Directon drop two places to Number 3 with ‘Little Things.’ Labrinth featuring Emeli Sandé holds firm at Number 4 with ‘Beneath Your Beautiful’, while Alicia Keys scores her third Official Singles Chart Top 5 as a leading artist with new single ‘Girl On Fire’ coming in at Number 5.