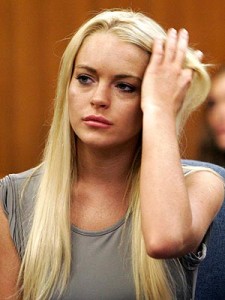 The troubled actress was arrested earlier today after allegedly hiting a pedestraian with her Porsche Cayenne and fleeing the scene.
The actress was pulling in to park her car around when she clipped a man walking passed. One of her friends in the car got out, checked the carfor damage and then the then Lohan and her entourage went into the Dream Hotel in downtown Manhattan.She left the hotel at aroun 2 a.m. where she was arrested.