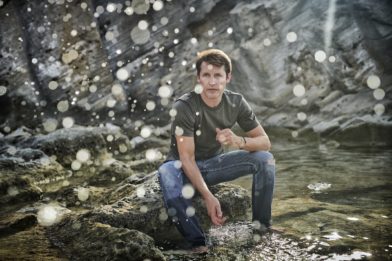 In the lead up to his UK headline tour, James Blunt today reveals a surprise new version for his next single ‘Halfway’, which now features a duet with country-pop duo, Ward Thomas. The original solo version appears on James’ UK top 3 and latest album, ‘Once Upon A Mind’. James will embark on his UK tour with Ward Thomas this month which will include a show at the Royal Albert Hall on 7th April.

James’ vocal line interweaves beautifully with Ward Thomas’ harmonies in ‘Halfway’. Speaking on the single James said, “I originally wrote ‘Halfway’ as a solo performance, and the original version that appears on my album is just me on vocals. But after we recorded the track, it was obvious that this song was really meant to be a duet all along. Because the track has a real Americana vibe, I knew immediately that I needed the best Country singers I could find. I had to look no further than Ward Thomas, who really delivers a powerful performance on this duet.”

James kicks off the tour with support from Ward Thomas on February 14th in Birmingham and finishes at London’s Royal Albert Hall playing shows across Europe throughout the run.

After flirting with electronica on his last album, James Blunt returns to what he does best on new album ‘Once Upon A Mind’, writing classic songs that touch both the heart and the head. Highlights are many and include the breezy first single ‘Cold’, the poignant ballad ‘Monsters’, the pop swagger of ‘5 Miles’ and the country tinged ‘Halfway.’ There’s a warmth that permeates the entire album, and a real sense of personality.

James Blunt released his first album, ‘Back To Bedlam’ in the autumn of 2004 and soon after the single ‘You’re Beautiful’ became a global smash hit. He has sold over 23 million albums and has showcased his wit and charm more recently with his always engaging twitter account.