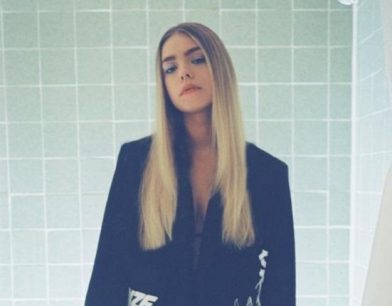 ‘NERVOUS’ sees L Devine collaborate with producer SIBA (‘Like You Like That’ from her debut EP ‘Growing Pains’) and John Hill (Rihanna, MIA, Charli XCX). For the track, musically she was inspired by Dev Hynes’ Blood Orange albums and Solange’s ‘Losing You’, while the lyrics address a universally relatable experience of trying to impress someone you like.

“I wrote the lyrics about a first date,” she recalls. “I was so incredibly nervous that I couldn’t be myself at all and it was impossible to do myself any justice. Afterwards, my mind just wouldn’t let me forget about it – I feel like I’m always battling with this inner dialogue that keeps reminding me of all the embarrassing things I’ve said and done. The song’s meaning has changed over time for me. It’s not just about a first date anymore, it’s about all the times I’ve beaten myself up about not being myself and losing sleep over a bad first impression I may have made.”

Peer Pressure, Can’t Be You and Nervous are out now!!

L Devine continues: “I love how collaborative and open he is to my ideas, and it always feels like we’re truly creating. As the song is about all the frustrations of my fears and anxieties – very scary stuff – I thought of old Hollywood horror movies when I was thinking about visuals. So we shot the video around classic Hollywood locations all in black-and-white. I also love that the video shows me wandering alone around this big, new city, feeling totally isolated and out of my depth, which is a feeling I’ve definitely felt moving from Newcastle to London to pursue music.”

Loaded with attitude, firmly rooted in reality but always with an edge, L Devine’s songs are inspired by her life and what she sees around her.

L Devine is a songwriter who can perfectly capture a moment, and an artist who can deliver that moment with lashings of attitude. At the heart of her music is a genuine love of pop and a desire to take it in interesting new directions.