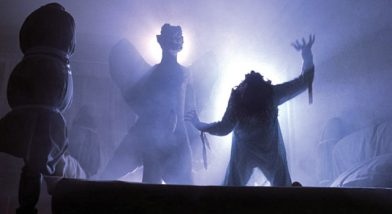 The Exorcist has been named the most terrifying film of all time by Brits.

The hair-raising classic, which caused controversy when it was released in 1973, took the top spot in a poll of 2,000 adults, followed by The Silence of the Lambs and The Shining.

It also emerged the heart-pounding thrill of a scary movie can leave a lasting impression on viewers, with almost two-thirds admitting to feeling nervous ahead of watching a horror film.

And more than a third have to be dragged to the cinema to watch a horror film.

Julie Daniels, head of Meerkat Movies, which commissioned the research, said: “Horror films may not be for everyone, but there are many movie fans who love the adrenaline rush.

“With the likes of Get Out and IT being box office hits in recent years, we anticipate that this year’s cast of scary films will bring in the crowds.

“With Halloween falling on a Wednesday this year, horror fans can also take advantage of 2-for-1 cinema tickets, assuring safety in numbers”

The study also found the aftermath of watching a particularly frightening movie is leaving many to resort to superstitious measures.

After watching a horror film, one in five will make sure they double lock the doors at home and a further 20 per cent leave the lights on to keep themselves safe.

And 18 per cent of respondents, surveyed by OnePoll.com, admit to checking under the bed and behind the door just to see if something is lurking there.

A quarter will even watch light-hearted TV before they go to bed so they can switch off from the scary film.

It also emerged many horror fan resort to various coping mechanisms while watching a scary flick on the silver screen to stay composed.

Thirty-five per cent admit to closing their eyes during especially scary parts while one in 10 use their trusty smartphone as a distraction tool.

As Halloween approaches, the biggest horror flicks of 2018 are creeping onto cinema screens, including the latest installment in the Halloween saga.

While scary movies are clearly still high on the public’s agenda – with more than half of Brits enjoying a horror film – many are also fighting reservations about heading to see a fright-fest.

To relieve the tension and help film fans cope with the stress of a scary film, Meerkat Movies has created its own “horror film survival guide”, including top tips and advice on how to take the horror out of the latest scary films.

The Top 10 Scariest Horror Film of All Time