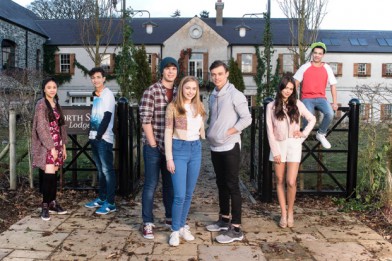 Disney Europe Middle East & Africa (EMEA) have announced the start of production on The Lodge a 10 x 22-minute teen-drama that tells the story of fifteen-year-old Skye who returns with her father to her childhood holiday lodge in Northern Ireland.

The new series features an international and multi-talented cast drawn from emerging talent across Europe including Great Britain, Denmark, The Netherlands and France. They will rock-climb, kayak, mountain bike, occasionally sing and dance. It will be shot in the Northern Irish town of Ballynahinch before airing on Disney Channel in 108 territories across EMEA later in the year.

The story follows Skye who is trying to use her new location to make a fresh start following the death of her mother. However, Skye’s new life will not be without complications as she navigates the everyday pressures of life as a teen; from making friends and ‘frenemies’, to a love triangle and a mystery that will shake her world. With nine original songs music is integral to the telling of this story, the central theme of which focuses on courage and staying truthful to who you are.

David Levine, Vice President, Programming, Production and Strategic Development, Disney Channels EMEA and General Manager, Disney Channels UK & Ireland comments: “We’re excited about bringing The Lodge to our Disney Channel fans across the UK and EMEA. We have a truly talented cast with exceptional vocals putting their stamp on characters that kids will care about and story lines that will inspire. The series’ universal storylines, themes and characters are certain to demonstrate great Disney storytelling and strike a chord with viewers.”

Steven Andrew, Zodiak Kids Studios, who is executive producing, comments: “The Lodge is an ambitious and exciting project which we are thrilled to have the opportunity to be producing for Disney. It’s a demanding show, requiring our young and talented cast to climb, kayak, mountain bike, whilst occasionally singing, and dancing. The show charts that precious period of teen awakening, when all experiences are intense, treasured and forever memorable. Expect a warm, funny, emotional roller coaster of a show.”

The Lodge will also feature a talented supporting cast including Cameron King, Cordelia Bugeja, Dan Richardson, Dominic Harrison, Emma Campbell-Jones, Geoff McGivern, Marcus Garvey, and Martin Anzor. Ballynahinch is also one of the stars, with the surrounding countryside providing a stunning backdrop to the active pursuits – kayaking, mountain climbing and biking – of the The Lodge characters.

The commission of The Lodge follows the recent success from Disney EMEA’s The Evermoor Chronicles, a continuation of the of live-action mini-series Evermoor. Disney EMEA drives the investment in, and development of, animation and live-action programming for both European and global distribution. Disney EMEA has already achieved great success with series such as Violetta, Binny and the Ghost, Alex & Co. (Disney Channel); Henry Hugglemonster, Art Attack and Jungle Junction (Disney Junior) and Randy Cunningham: 9th Grade Ninja (Disney XD).