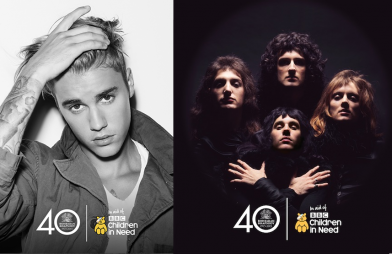 Celebrities from the worlds of music, film, TV and Radio have joined forces to celebrate the 40th anniversary of Queen’s ‘Bohemian Rhapsody’ by taking part in an exclusive photography project in aid of BBC Children in Need.

Names such as Justin Bieber, Ellie Goulding, Nick Grimshaw, Rita Ora, Tom Jones, Dizzee Rascal, Clara Amfo and James Bay have all been photographed for portraits in the classic ‘Bohemian Rhapsody’ pose, made famous by Freddie Mercury, Roger Taylor, Brian May and John Deacon on the cover of Queen’s No. 1 single which was first released on October 31 1975.

The images are launched today in tandem with a Queen & BBC Children In Need – 40 years of Bohemian Rhapsody App, which is available to download for free from iTunes and Google Play. Those who get the app will be able to insert their own face in the ‘Bohemian Rhapsody’ artwork or record themselves rocking out to Brian May’s famous guitar solo – head over to http://po.st/QueenApp to download the App!

Queen have been marking the 40th anniversary of what is arguably their best known and most successful song to date with a variety of activities and events. Queen were honoured with ‘Classic Single’ at last month’s Q Awards and are set to be inducted into the Classic Rock Roll of Honour as ‘Living Legends’ this Wednesday, Roger Taylor appeared on Radio 2’s Chris Evans and 6 Music’s Shaun Keaveney the day before the anniversary to talk about the enduring legacy of the song, and incredible scenes took place at Westfield London this weekend with hundreds of shoppers recreating the famous ‘headbanging’ scene from 1992 movie ‘Wayne’s World. Watch the videos over at Youtube.com/QueenOfficial. Queen are also set to release ‘A Night At The Odeon’ on 20th November, filmed at the Hammersmith Odeon on Christmas Eve 1975 as part of the first tour the band ever played ‘Bohemian Rhapsody’ on.