oe Sugg & Caspar Lee visit hmv stores across the UK for one of the most extensive hmv store tours ever undertaken for a DVD release. They will take selfies with fans as they receive signed copies of their new DVD ‘Joe & Caspar Hit The Road’. Reading, Birmingham, Manchester and Glasgow events are now fully subscribed, but fans who would like to attend the Oxford Street event still have a chance to grab the last remaining spaces by pre-ordering the DVD in store.

World famous online talent Joe Sugg and Caspar Lee have produced and are starring in their first-ever exclusive feature length film, Joe & Caspar Hit The Road for BBC Worldwide. The extremely popular internet sensations (who have over 10 million YouTube subscribers and over a billion total video views between them) come together for a one-off special commission.

Joe & Caspar Hit The Road, will see Joe Sugg and Caspar Lee go on an epic European adventure. Unlike Joe, who used to be a roof thatcher, Caspar has never had a proper job or a gap year and he wants to make up for it. Joe challenges Caspar to survive a road trip around Europe using only the money they can earn each day. While they are on the road, the pair will be offering themselves up for employment in a series of unusual tasks they have absolutely no experience in, such as learning to be gondoliers in Venice, working as deckhands on a super yacht, and performing on Barcelona’s famous Las Ramblas. Viewers can expect plenty of laughs, pranks and unexpected visitors along the way, as well as exclusive extra content. 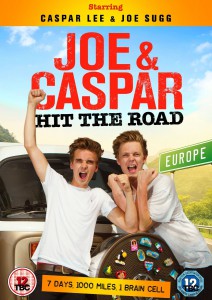