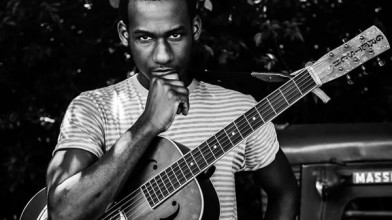 Texan soul singer Leon Bridges will be the latest artist to perform in Amazon’s Front Row Live series. The announcement comes after the UK launch of his much anticipated debut album Coming Home, which is available to purchase in digital and CD and vinyl formats now.

The exclusive show will take place on 10th July at London’s 220-capacity venue Notting Hill Arts Club. A limited amount of free tickets are being given away to customers who can register via the Amazon.co.uk website, and tracks from the gig will be available to view on www.amazon.co.uk/frontrow later.

Bridges has built hype both stateside and in the United Kingdom ahead of his debut – accolades include making NME’s ‘Ones to Watch in 2015’ list. The Amazon Front Row Live show will follow closely behind a slot on the John Peel Stage at this year’s Glastonbury festival.

Last year, Amazon Front Row Live held a performance by George Ezra when his debut album Wanted on Voyage launched in the UK. Ezra went on to receive four nominations at this year’s BRIT Awards and make the top 3 best-selling artists of 2014. Artists including Ed Sheeran and Paul Weller have since taken to the Amazon stage for exclusive customer shows which are now available to stream on Amazon’s Prime Instant Video service.

“Leon Bridges is a massive talent and Amazon is delighted to help him establish his career here in the UK,” said Steve Bernstein, Director of Amazon EU Digital Music. “We regularly host live shows for our customers and are always on the look-out for the very best performers to bring the house down, whether it be to help launch a rising star like Leon or bring world renowned acts like Paul Weller and The Kaiser Chiefs to audiences for once in a lifetime intimate gigs.”

The performance will be filmed and later made available to watch as part of Amazon Front Row Live. Fans can keep up-to-date with the latest news by following @AmazonMusicUK on Twitter and Facebook (Amazon Music UK).