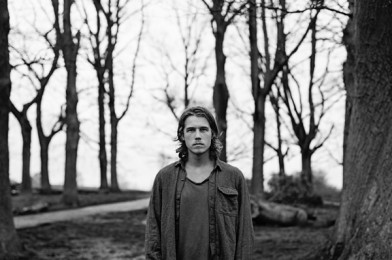 Andreas Moe, a Swedish artist with a prodigious amount of talent is set to be a hit with the release of his latest EP: ‘Ocean’. The 25 year old caries, with dignity, the responsibility of being not just a singer, but a songwriter, producer and multi-instrumentalist.

Having worked alongside British pop rock groups like Lawson and Rixton, as well as accredited music producer and writer, Jake Gosling, Moe has a myriad of professional experience and class in what he does. Yet despite having written for such artists his style is nonetheless unique from these bands’ pop rock genre. Moe, from an early age, was inspired by artists like Michael Jackson and took interest in the charged sound of further notable singers such as Jeff Buckley; this is very clear in the way he sings and has developed his sound.

‘Ocean’ is a strikingly powerful pop/acoustic EP aggregating 4 songs that are beyond our expectations. Immediately it is clear that these songs are strongly acoustic through the skilled play of the guitar. But it is how this is paired with synthesised sounds that gives weighting to the tracks and makes them more appealing to a wider audience. Most importantly, Moe’s voice fervently expresses emotion behind his lyrics which he sings in a raw yet authentic voice, something that is deeply inspiriting. If you are a fan of artists such as Gosling, Kodaline and Irish-pop duo, Hudson Taylor, then you will certainly enjoy this EP which is so distinctively similar to these artists.

Song by song, this is an EP of high praise. ‘Ocean’ is a track to lose yourself in; it’s relaxing and peaceful yet also the drums make this track both vibrant and upbeat, more interesting than the conventional acoustic song. There is a touch of Scottish/ Irish traditional sound within it and I could definitely see it as a major soundtrack feature for a Hollywood film. ‘Tangled Vine’ however, is bitter sweet and a song undeniably beautiful. Imagine the sound of a male solo singer version of Haim’s music and you have this song, which, much like songs produced by Ed Sheeran, demonstrates the artistry of Moe’s talent.

Although melancholic at first, track, ‘Second Wind’, rather builds to a blithe chorus which sounds incredibly like a Hudson Taylor song. Definitely a toe-tapping, head shaking tune this is song to lull you into a state of repose, as does the beguiling ‘Ocean.’ Then we have the stripped acoustic version of ‘Ocean’ which is minutely different to the original however it allows us to listen a lot more closely to the vocals which are on-point throughout and perfectly emotive.

Whilst this is a fresh, exciting EP that will certainly engage lot of fans, I have described how the songs are intensely calming rather than equally uplifting. This EP isn’t one that you can expect to play at a party or club so gives reason to say that in many ways this EP isn’t suitable for such occasions nor something that many young people and thrill-seeking enthusiasts will love to listen to. However this doesn’t go to say that the EP can’t be a success. Look at John Legend’s track, All of Me; it is a serene song of love that stayed in the charts for up to 18 weeks despite not being an up-tempo pop song whose genre is becoming increasingly more popular among the public.

Definitely worth listening to, this EP is soft, revitalising, and as cool as a summer’s breeze. With all due respect it won’t be everyone’s taste but it’s a track that without listening to, would mean missing out on something exceedingly good.