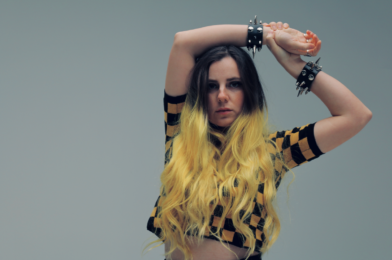 AViVA has announced a UK tour for May 2022. She heads to Manchester, Cardiff, London, Birmingham and Glasgow next May, with tickets on sale at 10am from Friday 24th September.

Unafraid of baring all in her music, Australian-born, L.A. based artist AViVA continually explores the themes of control and isolation within her music. AViVA describes her songs as being about the “Outsider experience,” something clearly expressed in both her lyrics and the sonic palate of her songs.

AViVA has developed a growing online following with her unique alt pop-rock emo sound, building a strong community of fans – her ‘Outsiders’. Since her debut single ‘GRRRLS’ in late 2017 her distinct sound and message has garnered the support of tastemakers globally on YouTube and Spotify. Since then AViVA has amassed over 3 Billion global streams.

AViVA has spent 2021 releasing new music and securing a book deal for her debut novel, set to be published by MacMillan publishing and released in October 2021. On top of this, she has announced news of a huge UK tour for May 2022.

Tickets go on sale at 10am on Friday 24th September from http://gigst.rs/AViVA.