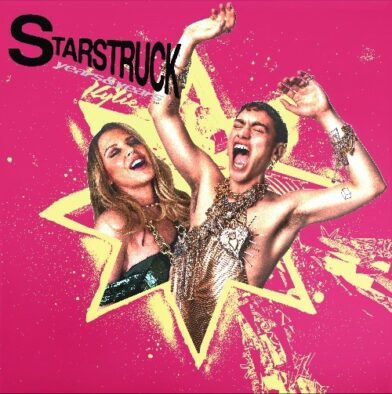 Years & Years have released a brand new remix of “Starstruck” today which features the one and only Kylie Minogue. This feel-good floor filler sees Kylie and lead vocalist Olly Alexander seamlessly combine their voices together in a delicious blend of pop and dance magic.

Kylie recently achieved her eighth Number 1 album with ‘DISCO’, out last November via BMG. With the release of ‘DISCO’, Kylie set new Official Chart records – becoming the first female artist to score a Number 1 on the UK’s Official Albums Chart in five consecutive decades – in the ‘80s, ‘90s, ‘00s, ‘10s and ‘20s.

🌟 STARSTRUCK 🌟 REMIX WITH @Kylie Minogue IS OUT NOW !! this is such a wonderful day !!💕Listen now: https://YearsandYears.lnk.to/StarstruckKylieYTYears & …

This new version of ‘Starstruck’ is quite literally a dream come true. Kylie is an icon who has inspired me since I first started making music, so this feels out of this world. I asked if Kylie would be interested in doing something on the song and I’m so thankful she said yes! I’ve been on cloud nine ever since and she’s really brought so much to the song, her voice is divine and her presence is just magic. I really hope people enjoy this moment of cosmic fantasy, I’m over the moon and the stars and the planets that this has happened!” – Olly Alexander, Years & Years.

This follows Years & Years’ incredible performance at the 2021 BRIT Awards of ‘It’s A Sin’ with Elton John. Olly has been going from strength to strength since his leading role in the Channel 4/HBO drama of the same name. He’s also become an important voice on discussions around mental health and issues affecting the LGBTQ community. Along the way, the multi-platinum singer has also earned 5 Brit Award nominations and has sold out numerous global tours.