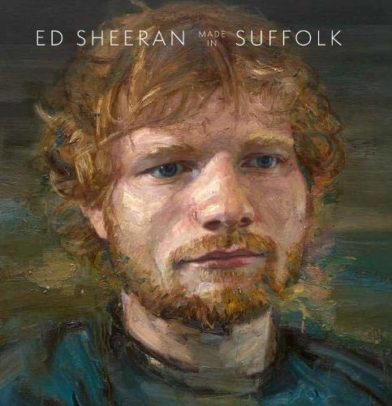 Suffolk charity GeeWizz has announced the very special gift of an artwork created and donated by Ed Sheeran to the Ed Sheeran: Made in Suffolk Legacy Auction. The colourful abstract painting, Dab 2 2020, is the first and only painting Ed has ever made available for sale. It is now open for bids, for more information please visit www.edsheeranmadeinsuffolklegacyauction.com

Ed started painting in Suffolk after his global Divide Tour ended in Summer 2019. The vibrant artwork, created from house paints on a large square canvas, is framed, measuring 128 x 128 cm, and is one of over 200 lots featured in the Ed Sheeran: Made In Suffolk Legacy Auction. Promoted online until 8 November, the auction will support children, teenagers and young people across East Anglia with disabilities, life-limiting illness and cancer

“Ed has been creating art since he was a child.” his father John Sheeran said. “This energetic, expressive painting is such a positive affirmation of life. It’s like a visual equivalent of one of his upbeat songs.”

Dab 2 2020 is featured alongside artworks by acclaimed visual artists, including Damien Hirst, who has donated Patience 2019 a signed, limited edition print, inspired by the spiritual symbolism of the butterfly. Ed created the spin paintings for his ÷ (Divide) album cover at Damien Hirst’s studios in 2016.

Working closely with John and Imogen Sheeran, Ed’s parents, the Legacy Auction has been organised by Gina Long, founder of children’s charity GeeWizz and the auction’s co-beneficiary Zest, part of the St Elizabeth Hospice.

“The generosity from around the globe has been incredible, especially at a time when we are all facing such challenges and uncertainty.” Gina Long said. “But it is in this very different world that the pressing need to support children with special educational needs, high dependency disabilities, progressive or life-limiting illness and cancer could not be greater.”

Several items have been donated by Ed and his family: they include possibly the most romantic gift ever Ed’s handwritten lyrics to the global hit Perfect; a signed ticket and handbill from his first-ever gig at the Royal British Legion in Framlingham (entry £3!); Ed’s homemade CD of the You Need Me EP 2009 and a collection of his childhood Lego® bricks.