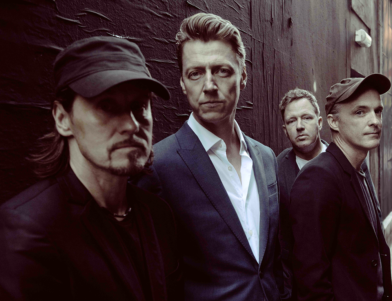 Ahead of the release of their critically acclaimed new album, ‘10 Songs’, this Friday, Scottish legends, Travis, have today released romantically reminiscent new track, ‘Waving At The Window’.

Taken from the band’s anticipated new album ’10 songs’, which Mojo praised as a “fine (piece of) work from the unsinkable Glaswegians” and with the Sunday Times commending its “indelible melodies and timeless songs”, ‘Waving At The Window’ follows the release of the beautifully melancholic, ‘All Fall Down’. Alongside each track, frontman Fran Healy has demonstrated that his talents know no bounds with a stunning art inspired video directed by the man himself.

Listen to ‘Waving At The Window’ here.

Travis – Waving at the Window

Listen to Waving at the Window by Travis.

Co-produced by both Fran and Robin Baynton (Coldplay, Florence & The Machine), and recorded at RAK Studio, ’10 Songs’ is about the way life comes at love and what love does to weather those challenges. It’s grown-up. There’s sizzling synergy in abundance and benefits from the almost psychic sense of mutual attunement that comes from being in a band whose line-up hasn’t changed in its entire collective lifetime.

2021 will also welcome the band back on the road with an extensive UK headline tour including a London show at the iconic Roundhouse.