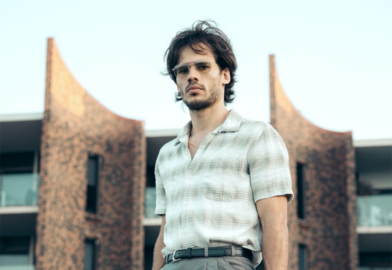 Co-directed by T Truman and frequent aesthetic collaborator Timothy Heinrich, the video for “Born To Be Right” places Truman in the most apt of settings. Mirrored walls, check. Chequerboard floor? yes sir. An entourage of dancers? naturally. This is T Truman in his natural habitat.

Speaking on the new single, T Truman added: “I’m just having a joke about being a know it all and wondering why no one likes my company.”

On the contrary, the video for “Born To Be Right” certainly seems to suggest a fair few people (namely dancers seemingly plucked straight from the 70’s) do enjoy the company of Mr T Truman.

“Naturally the video needed a disco scene,” T Truman went on to say on the video. “So my mate and I cleared out a garage in Australia, put on safari suits and begged our friends to come.”

Picture a neon-lit graveyard, where a solitary figure in a double-breasted suit sits at a grand piano, basking in the glow. “Rock and roll is six feet under” croons T Truman, “and I’m out stealing its thunder.”

From the first hammer of the keys, Truman oozes pure class. Written in hotel rooms across the world and taking inspiration from the glitzy pop-rock of the 70s, his recordings glisten with the sheen of a well-travelled man.

The Australian’s wry wit shines through on his debut collection of piano-pop hits ‘Born To Be Right’, with his unique lyrics covering everything from dating in the 21st century (‘Loretta’) to juggling the work-life balance (‘Holiday’) in the self-aware and humorous way that only T Truman can.

T Truman’s much-anticipated debut EP ‘Born To Be Right’ is out now, released today 7th October, 2020. Watch the video for lead single and title track, “Born To Be Right”.