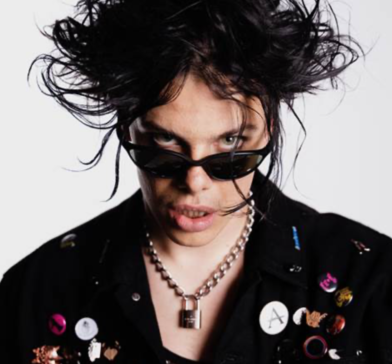 Announced during his appearance on Clara Amfo’s show today for Radio 1’s Live Lounge Month 2020, The YUNGBLUD Podcast will see the singer-songwriter turn his hand to presenting as he meets young music fans who are approaching turning points in their lives. Each week, he’ll chat to one fan to discuss topics and issues affecting young people today, whether it be gender, sexuality, identity, money worries, friendships, style or mental health.

YUNGBLUD says: “I am so excited to be able to have one-on-one conversations with young people about what is going on in the world right now, and hear it from their perspective. I’m so sick and tired of talking about things from my perspective! I can’t wait to hear what they’ve got to say, and what we’ve got to say together.”

Aled Haydn Jones, Head of Radio 1, says: “YUNGBLUD as an artist sums up what Radio 1 stands for: he’s all about energy, passion and excitement, and we know our audience have a close affinity with him and what he represents. His journey with the station so far has been hugely exciting, so we’re pleased to welcome him to the Radio 1 family with a new podcast and platform for connecting with young people in the UK about the issues that really matter to them.”

Multi-instrumentalist YUNGBLUD has already amassed a die-hard legion of young fans, with 2.4 million followers on Instagram, 1.7 million YouTube subscribers and over 1.4 billion streams worldwide. Born in Yorkshire, he first picked up a guitar aged two and began writing his own songs at age ten, counting the likes of N.W.A and The Clash among his influences. After breaking onto the scene with his self-titled EP, YUNGBLUD made his full-length debut in 2018 with 21st Century Liability. He released ‘the underrated youth’ EP the following year, which debuted in the top 10 on the UK Official Albums chart, and will release his new album WEIRD! later in 2020. Over the years, YUNGBLUD has performed to sold-out crowds in over 20 countries and played some of the world’s biggest festivals. In 2018, he graced the BBC Music Introducing Stage at Radio 1’s Biggest Weekend in Swansea and the Radio 1 Stage for Radio 1’s Big Weekend UK 2020, and landed a Top 3 spot for BBC Music’s Sound of 2020 poll earlier this year.