Norway based pop superstar Dagny has just released the Bjørg & Doris-directed video for new single “It’s Only A Heartbreak”. Wanting to move on from the breakdown of a relationship and put her past behind her, she calls on the help of some friends to help her dance her troubles away.

“It’s Only A Heartbreak” is lifted from Dagny’s upcoming debut album Strangers / Lovers, out October 2nd via Little Daggers Records. Showcasing her growth as an artist and her focused creative vision as a purveyor of joyous electro-pop, the album – divided into distinct halves tracks the journey of a relationship. The first half documenting the blossoming early stages of a new love, and the second – examining the fall out of that relationship.

Propelled forward by lush synths, bouncy electronics and jittering percussion, “It’s Only A Heartbreak” could well be Dagny’s finest moment to date. The track’s conversational lyrics see Dagny reflecting on her own emotions post-breakup – and telling herself she can get through this: “Most days I wake up I’m okay / I’m doing my own thing, I don’t have a moment to think about you / Most days I’m up on a high wave, And I’m just like urgh, It’s only a heartbreak, I got to get through you”.

Speaking on the new single release, Dagny commented: “It’s Only A Heartbreak is actually partly inspired by the classic movie “Casablanca” from 1942, and Humphrey Bogart’s famous quote: “Here’s looking at you, kid”. Like the movie, the song is about knowing that you will never get someone back, but you can secretly still look at, and admire, that certain someone. The song carries a nonchalant expression, but the undertone makes it pretty obvious that you’re not over that person yet.”

Following the release of Side A of Strangers / Lovers in May earlier this year, its two lead singles “Come Over” and “Somebody” undoubtedly proved Dagny is in the songwriting form of her life. “Come Over” (described by The Guardian as a “thundering synthpop explosion” spent 3 weeks at the top of the Norwegian radio-airplay charts, and ”Somebody”, having already amassed over 14 million streams, was a mainstay in the Norwegian Top 10 on Spotify upon its release, and also hit the top of the Norwegian radio-airplay charts.

The full Strangers / Lovers album, out October 2nd, is the culmination of 5 years hard graft. Since the release of breakout debut single “Backbeat” in 2015, her debut full length album has always been the end goal.

Dagny’s story proves that the journey is just as important as the destination. It might not have followed the path she’d expected, but it’s made her the better for it. With Strangers / Lovers she has not only created some of the best songs of her career but found something equally as valuable: contentment.

“Being able to release music and playing shows is how I feel happy doing what I do. I would call that successful,” she says. “I need to try and not think too much about what this album is going to do, but remember how it all happened, the good times we had making it, the people I met while making it, the emotions that I tried to convey and whether I feel good. It needs to go and live its own life.”

“It’s Only A Heartbreak” is out now via her own Little Daggers Records, under an exclusive license agreement with Universal Music AS in a joint venture with Polydor DE. 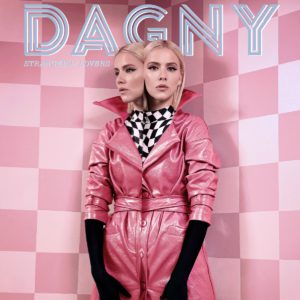