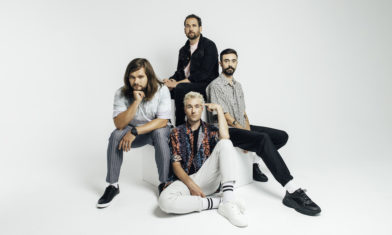 Following this summer’s surprise release of the raucous Graham Coxon collaboration ‘What You Gonna Do???’, Bastille change things up yet again with defiant new single ‘survivin’’ — a lyrically vital and sonically intrepid song about the version of ourselves we choose to give away to others. Against a compellingly different sonic backdrop, frontman Dan Smith hits a new level of directness and honesty as he reflects on anxiety, self-doubt and the sometimes overwhelmingness of modern life.

Dan began work on ‘survivin’’ months before 2020 turned on its head, intending it to be a frank account of the highs and lows of Bastille’s seven years in existence. “There’d been times when I felt like I’d been in a washing machine and on a conveyor belt at the same time,” he says, “but when people asked me how I was doing, the answer was always the British cliché: ‘Yep, all good, fine.”

“At the start of lockdown I felt very self-conscious about having written a song that felt relevant when it wasn’t intended to be, but then I also think 2020 is the year we all stopped pretending everything’s fine.”

‘survivin’’ is infectiously sparse and packs in pop-cultural references alongside constantly surprising musical moments. From the opening drum loop and rolling baseline, to the sudden ensemble of flutes offset against moments of hard auto-tuned vocals, to the chorus that hits like a “warm enveloping hug from a gang of friends”. There’s also copious sax courtesy of Bastille’s touring member Rittipo “We wanted his sax lines to be obnoxiously loud and we wanted them to make people smile.”

‘survivin’’ showcases a new, groove-led sound for Bastille, and along with ‘What You Gonna Do???’ is typical of Bastille’s new expect-the-unexpected sonic identity!