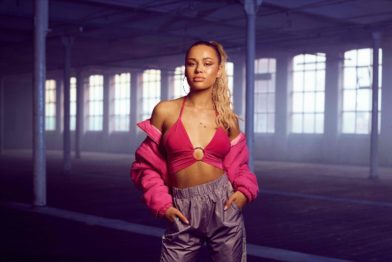 Having hit 1.5 million streams at Spotify with her debut single ‘Adore You’, Kiara Nelson takes a bold step forward with the release of her second track ‘Kisses For Breakfast’ – a catchy pop empowerment track. Listen below.

In ‘Kisses For Breakfast’, Kiara Nelson’s golden soulful topline gleams powerfully over an addictive soundbed of dancefloor-friendly R&B, pop and soul. Her vocal brims with confidence, yet the song’s lyrics express a situation in which even the most self-assured character can feel insecure about a situation – and it often has to do with a new love. It’s about empowering yourself in the moment: embracing a new relationship, breaking free of your inhibitions and giving 100 per cent of yourself to your new love.

“Kisses For Breakfast to me is a very sweet and special song about meeting someone that changes you for the better. A person that makes you want to dive in fully into the relationship even if you’re someone who’s usually scared to catch feelings. I think the song is a cute representation of the beginning of a relationship when you realize you really want to hold on to someone. And give them kisses for breakfast every day!” says Kiara.

‘Kisses For Breakfast’ was co-written by Kiara with the track’s producers M-22 (Robin Schulz, Klingande), who also worked on ‘Adore You’. There’s a magic touch to their creative connection. They first made an impact when Kiara featured on their dance anthem ‘After Hours’, which has exceeded 17 million streams at Spotify. It picked up substantial support from Radio 1 in the shape of airplay from Scott Mills, Pete Tong and Diplo. Kiara and M-22 also performed at Radio 1’s Dance Anthems Live From Ibiza events, which were hosted by MistaJam at the Ibiza Rocks Hotel and Café Mambo.

Born in Jacksonville, Florida, Kiara grew up in Finland in a family full of strong women. They encouraged her to follow her love of singing, with Britney Spears being an early favourite. Despite her obvious talent, she suffered from stage fright which her mum helped her overcome by dragging the then 17-year-old to karaoke nights each weekend.

It’s hard to believe that was just five years ago, yet Kiara has both the talent and the personality to make a global breakthrough. She’s upright and independent, with the self-confidence to know that she can be herself rather than the stereotypical pop star persona. She’s down-to-earth but determined: exactly what she needs for the journey ahead of her.