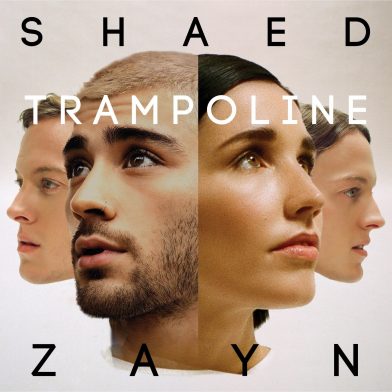 SHAED is having a moment right now thanks to the massive success of their debut single “Trampoline.” Now the DC trio is taking it up another notch with the help of ZAYN – who has lent his vocal to a spectacular new version of the track that features a duet between the pop star and SHAED’s Chelsea Lee. “’Pillowtalk’ is one of my all-time favourite songs,” said Lee, adding, “I warm up to it all the time so singing a duet with ZAYN is extra special and totally surreal.”

The band had been looking to build on the single’s success, “we reached out to ZAYN’s team and a week later we woke up to a recording of ZAYN singing ‘Trampoline’ a cappella in our AirBnb in LA. Goosebumps.” “Trampoline (feat. ZAYN)” is out today and available via all DSPs.

It’s been less than a year since “Trampoline” first catapulted into your home via Apple’s MacBook Air Ad and since then the song has streamed 300 MILLION times worldwide. It’s also propelled the band to #1 on Billboard’s Emerging Artists Chart and is currently making its way into the pop world – #11 on Top 40 and hitting #34 on the Hot 100.

The single – which is certified gold in the US and nearing platinum – is off the band’s second EP MELT that was released last September via Photo Finish Records. After securing the MacBook Air Ad, SHAED quickly secured slots on some of the biggest 2019 festivals including Lollapalooza, Governors Ball, Bumbershoot, Hangout Fest, Firefly, Summerfest, BottleRock and Summer Sonic (Japan). This summer they made their Morning TV debut on Good Morning America – the #1 AM TV show in the US right now – and on September 5th they made their debut on Jimmy Kimmel Live! performing “Trampoline” and new single “Thunder” as a web exclusive. Press has included USA Today, Variety, Billboard, Vogue, Interview, i-D Magazine, The Advocate, and Genius who just featured the band in their “VERIFIED” series where they break-down “Trampoline” (watch below).

“Trampoline (feat. ZAYN)” is out today and available via all DSPs and SHAED kicks off their biggest headline tour to date on Monday, September 30th with a sold out show in Minneapolis.