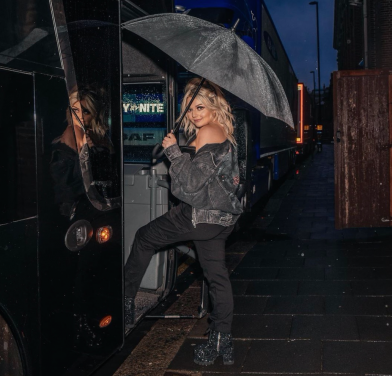 Taylor Grey is currently supporting The Vamps on selected dates on their 2019 ‘Four Corners’ UK Tour. On the back of the success of the tour, Taylor has just released a self-penned, brand new single, Intentionally via Kobalt Music Group. We got the chance to chat with the Californian pop star while in the UK.

On Intentionally Taylor nonchalantly sings “Baby I can’t ignore all the romantic sh*t you do…Ok, it’s cool I f*ck with you,” demonstrating sass and a modern-day twist on the classic love song, her powerhouse vocals sublimely intertwine with the subtle pop beats of the track. Taylor sheds some insight on the new single, sharing how she’s been waiting for the right time to release; “I’ve had this song in my back pocket for over a year and a half, always playing it live at shows, just waiting for the right moment to officially release it. Now, on the Four Corners Tour with The Vamps, couldn’t be a better time to do so.”

We asked Taylor about her career so far and what to expect from the future, with a few quickfire trivia questions thrown in just for a bit of fun.

Can you define your musical style?
I would call it edgy pop. I love pop production, but my lyrical content leans towards the alternative side. It’s a little dark sometimes, but I like being honest about emotions and experiences – not all happy and sunshine. It’d be great to live that life, but I don’t and I don’t know anyone who does.

What was the first spark that got you going musically?
Musical theatre! Loved doing musicals as a child and I found a real comfort on stage.

Which music artists/acts are you inspired by?
Many every single day. Stevie Nicks is my muse.

How do you start writing a song? Does a tune, a harmony, a mood or lyrics come first?
It typically all happens at once. I’ll play and sing and write lyrics all at the same time and piece it together that way.

Which music artist’s/act’s career path would you ideally want as a model for your own?
I look to Julia Michaels and BeBe Rexha as career inspiration because I admire what they do, how they do it and who they are.

You’ve already worked with some big names in the music industry. If you could collaborate with any contemporary music artist/act/producer that you haven’t already, who would you pick?
Bebe Rexha

What kind of song would you see yourself making?
A “badass female empowerment” anthem or an “I’m A Mess 2.0” because I’ve written so many of those songs and I’m not a stranger to that feeling.

What are your thoughts about the importance of social media for today’s music biz (YouTube, SoundCloud, Facebook, Twitter, Instagram)? How do you like to connect with your fans?
I think it’s an incredible tool to connect and chat with people but at the same time, it’s quite a lot of pressure. In an ideal world, I’d have deep conversations with everyone who wanted to talk because I’m still shocked that people listen and like my music and my artistry. But as a university student and a musician, I have such limited time to do that. Like I rarely even get a chance to text my friends back! I do try my absolute best and feel like I’ve developed real connections with longtime supporters who have been with me for months to years now. And social media is the reason for that!

It’s been a busy couple of years what with your first studio album, Space Case, your latest project, EP GREY, and now supporting The Vamps. You must be pretty excited?
Oh absolutely!!

How did your working relationship with the Vamps come about?

I wrote a song called Fallin’ with Brad Simpson 3 years ago. And when they were in California last year during their US leg of the tour, they invited me to open for them in LA and San Francisco. And they were so incredibly lovely and invited me back for dates on the UK leg!

What does performing live mean to you? Do you prefer live audiences or studio work? Do you have any rituals or routines you always do the day of / or right before going on stage?
Performing live is a really amazing chance at connection because there is something so transcending about live music.
And every day I do my vocal warmup and drink tea with honey. I don’t think I’ll ever not get nerves before I go on. But it comes with the territory of being an opener – you’re always nervous about how the crowd is going to react, you want them to like you! Maybe that’s just me and other people have more idgaf attitudes, but I just want people to come away having had a good time.

Is there something you have to have while working in the studio (a mascot, a special drink/food)?
My phone to record voice memos! You never want to forget a killer melody or lyric so you record it all!

What’s your favourite colour?
Black
And your favourite animal?
Dogs (I still have two although I’m allergic)
Do you support a team or sports star?
I used to track sports stats in order to impress boys in high school but I’ve come to realize what a waste of time that was. I have always been quite a big fan of going to Bay Area team games though (Warriors, Giants, Sharks) because I grew up there!
What’s your favourite food or meal? Do you usually eat-out, take-out, or cook yourself?
Chicken fingers and Postmates all the way.
Favourite film of all time?
Harry Potter series!
First album you ever bought? (Was it a record/cassette tape/CD/digital download?) How old were you? Do you still listen to it?
I think it must’ve been Hannah Montana/Miley Cyrus Best of Both Worlds CD. I’m still a big fan of her works.
What song do you have on constant repeat at the moment?
Truth Hurts by Lizzo
What’s the last book you finished?
What are you reading at the moment?
Psychology textbooks
10. Coffee or tea?
Coffee
X-Factor, The Voice?
The next season of American Idol!
Your favourite item of clothing right now?
Platform heels
What was the first poster you put on your wall as a young teen?
I wasn’t allowed to tape anything to my walls!
15. What’s your essential, can’t-live-without gadget?
Phone!
Do you have a pet?
Two Belgian/German Shepard mixes!
What qualities do you value most in a man or a woman? Are they different?
I value loyalty and sense of humour in everyone regardless of gender or sexual orientation.
What’s your favourite journey?
This one right now.
Who is your ultimate hero?
My mom.
And finally. . . what is your life motto or favourite saying?
I’m fine. Everything’s fine. It’s going to be fine. (Not too motivational I know, but I say it at least twice a day)

The new single Intentionally is available across download and streaming services.

Taylor Grey will be joining The Vamps on tour on the following remaining dates: