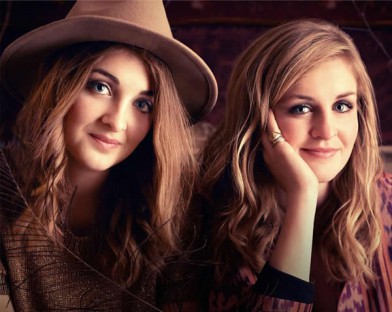 Fresh from the release of their second album – Restless Minds, 24-year-old twin sisters Catherine and Lizzy from Ward Thomas are back with a bang. They kicked off their UK tour at Cambridge Junction on Friday 1st March 2019.

The intimate venue in room J1 of Cambridge Junction generated interest from a number of people of all ages, and the atmosphere on the night had a real cosy, family feel. Before the show commenced, patrons were able to chill out and casually relax with a beer or two, as drinks and happy chatter flowed at the bar. T-Shirts were also on sale, so fans could take a memento of the evening home with them.

The supporting act of the night was up and coming UK act, The Wandering Hearts – and they are definitely a band to watch out for. This American and Country-folk style quartet consists of members AJ Dean, Tara Wilcox, Tim Prottey-Jones and Francesca Whiffin.

Their overall style and vocal harmonies are reminiscent of the iconic band, Fleetwood Mac. Their performance was thoroughly enjoyable and the crowd received them well.

And then, at 9pm, Ward Thomas took to the stage, and brought joy and excitement to their audience with an amazing two-hour set, including new single ‘Never Know’. Ward Thomas’ performance was charming, melodic and full of folksy guitar riffs.

The girls’ new material has been thoughtfully written, and include topics that tackle issues such as mental health, and the reality of social media, which are prevalent in today’s society.

The duo has definitely established themselves as a modern US-style Country music act that’s making a comeback in a big way, so watch this space!

Ward Thomas may be coming to venue near you! See below for upcoming dates: