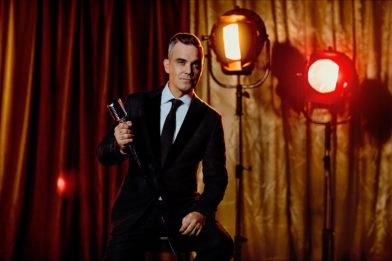 Fans of the award-winning performer will now be able to catch the highly-anticipated ‘Robbie Williams Live in Las Vegas’ production in summer 2019 with six dates in June.

The global music superstar will perform a run of spectacular must-see shows in March 2019 at Wynn Las Vegas on the city’s famous strip. Fresh from his 2017/2018 world stadium tour, the UK’s best-selling solo artist will perform his biggest hits, some swing songs and a few special surprises.

Robbie said: “I’m beyond excited to announce my first ever residency in Las Vegas. To follow in the footsteps of some of the greatest entertainers of all time is a dream come true – I can’t wait.”

The Las Vegas residency follows another successful year for record-breaking 18-time BRIT Award winner Robbie. This summer he performed at the opening ceremony of the 2018 FIFA World Cup in Moscow and is currently on our screens as a judge on this year’s The X Factor alongside wife Ayda Williams. He is in South America at the moment completing the final leg of ‘The Heavy Entertainment Show Tour’.