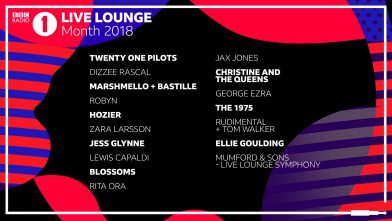 The 1975, Rita Ora, Twenty One Pilots and Mumford & Sons are among some of the artists stepping into the world famous Live Lounge this November on BBC Radio 1. Hosted by Clara Amfo in the new weekday slot of Monday to Thursday, artists will perform their own music, as well as their chosen cover tracks.

Kicking off on Thursday 1st throughout the month until Thursday 29th November, audiences can expect to hear from the biggest and newest names in the music business, with live performances from:

Radio 1’s Live Lounge attracts some of the biggest names across the globe and in the UK with alumni including Taylor Swift, Bruno Mars, Ed Sheeran, Sam Smith, Jay Z, The Killers, Foo Fighters and Wolf Alice.

The Live Lounge sessions will be hosted by Clara Amfo (Monday-Thursday, 10am-1pm) with performances available to watch on BBC Radio 1’s iPlayer and YouTube channels.

Clara Amfo says: “November is the time, back for another year with all of the artists our listeners stay loving! Whether returning to the Live Lounge or making their debut performance, it’s set to be another special month.”

Chris Price, Head of Music, Radio 1 and 1Xtra: “There’s nothing like Radio 1’s Live Lounge for getting closer to your favourite artist – or discovering a new one. Starting with an intimate, hometown portrait of Twenty One Pilots in the venue where it all started for them, and culminating with a symphonic interpretation of Mumford & Sons’ best known and newest songs, Live Lounge Month 2018 will once again bring you established and emerging artists as you’ve never seen them before.”

Mumford & Sons say: “We’re so stoked to be playing the Live Lounge for the fourth time – it remains one of the Great British institutions.”

Zara Larsson says: “I love doing Live Lounge it just puts you in a different space as an artist having to make someone else’s song your own. My favourite Live Lounge that I have done was covering Drakes “Too Good For You”. Me and my band had such a great time performing it.”