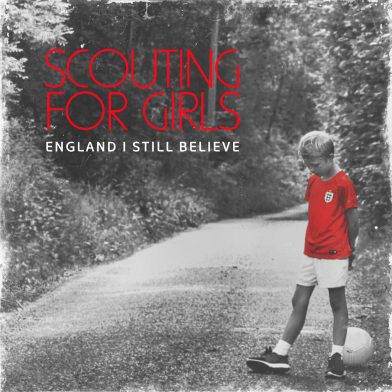 National Treasures Scouting For Girls have today announced the release of their World Cup single ‘England I Still Believe’, set for release Friday 15th June.  A subject close to their hearts, Roy Stride has confessed the national team of the nineties to be his first love. Listen below.

The song began life as a pub conversation after a game of 5 a side and is admirably a song about believing despite yourself, about feeling the excitement grow as the World Cup begins and deciding to hell with logic, experience and history and deciding to join the roller-coaster of emotions that is supporting England in the World Cup.

“This year we have the team BUT how can we win the World Cup without a World Cup Song? The country needed us (at least that’s what we told ourselves in the pub that night). This was our duty. Our national service.”

“Ever since watching those World Cup’s as a boy I still get excited every time I see England play football. Like seeing an old girlfriend at a party and she looks even better than you remember. Maybe this time it will be different. Maybe this time we will go all the way. I still believe.” – Roy Stride

Last year officially marked a decade since the release of the band’s unstoppable million-selling eponymous self-titled debut album, saw the band complete a major headline tour including the London Palladium and saw the band release a brand new album.

Scouting For Girls burst onto the scene and signed to Epic on 14th February 2007.  A decision which saw them enjoy a triple platinum Number 1 debut album, multiple Top Ten singles and earned them a dedicated set of fans that still follow them avidly a decade later.  The occasion was marked last year by a very special intimate Valentine’s Day gig at London’s Bush Hall to which over 20,000 loyal fans applied via a ballot to nab one of the 300 tickets available.

Throughout Scouting For Girls’ immensely successful career they’ve sold over 1.5 million albums, two million singles, had four Brit Award nominations, an Ivor Novello nomination, had four top ten singles, sold-out Wembley Arena and sold-out The Royal Albert Hall and had a series of hit singles all of which were inescapable radio smashes.

Scouting For Girls who are Roy Stride, Greg Churchouse and Pete Ellard will also be hitting the road this summer, coming to a festival near you.  See full dates below.

‘England I Still Believe’ will be available for purchase and streaming across all digital platforms. This will include via Musicoin, a first for a major artist. Musicoin is a blockchain based streaming platform which pays artists at an unprecedented rate per play and does not use advertising or monthly subscription. Artists are paid in Musicoin in a pay-per-play model using smart contracts. https://musicoin. org